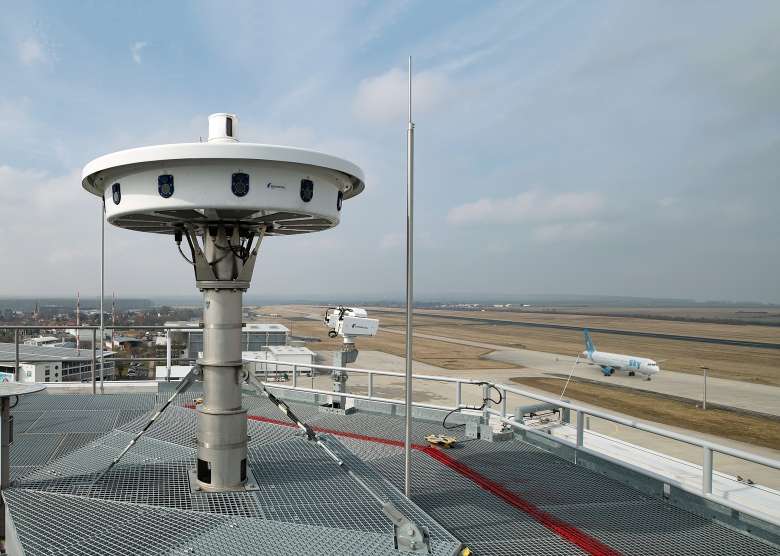 Starting this morning, air traffic at Erfurt Weimar Airport in the east of Germany is being controlled from Leipzig, around 100 kilometres to the southwest as the crow flies. Leipzig is the site of the Remote Tower Control (RTC) Centre of DFS, the German air navigation service provider. From here, DFS already successfully monitors air traffic at Saarbrücken Airport, hundreds of kilometres to the west near the French border.

A sophisticated camera system on the Erfurt control tower ensures that the air traffic controllers can control traffic without needing to look out of the tower cab. High-definition video and infrared cameras deliver a continuous 360-degree view of the airport. Static cameras covering the apron and pan-tilt-zoom video and infrared cameras have been set up, allowing small details to be seen. The air traffic controllers have a much better view thanks to the infrared technology, especially at night. The RTC system also allows aircraft and vehicle movements to be tracked manually or automatically, and highlighted on the monitors.

"Our remote tower control system exemplifies innovation, efficiency and our unchanged high safety standards," said Arndt Schoenemann, CEO of DFS. "The overall concept of infrared, colour sensor technology and automatic object tracking and detection sets us apart from other air navigation service providers. This gives us the most advanced remote tower technology in the world."

DFS has already been successfully operating the RTC system for years. Air traffic at Saarbrücken Airport has been controlled from the Leipzig centre since December 2018. "Since then, more than 36,000 flights have been controlled and more than 600,000 passengers have been transported without any adverse impact on airspace users. We are proud of that," said Schoenemann.

Prof Gerd Stöwer, Managing Director/CEO of the airport operator Flughafen Erfurt GmbH, also praised the use of RTC: "As an international airport, we support this innovative project to have air traffic control for take-offs and landings provided from a central location. By participating in this project, we are making a positive contribution to further increasing the efficiency of the German air transport system. Thanks to the use of state-of-the-art technology, air traffic control services in the terminal control area of the airport can continue to be provided safely. The existing excellent working relationship between the airport operator and DFS will be successfully maintained with RTC."

Compared with the RTC system in use for Saarbrücken Airport, the one for Erfurt Airport was adapted only slightly. "It was important for us not to change anything fundamental. Basically, both systems should be as identical as possible to make the work easier for those controllers who will be trained for both airports in the future," explained Schoenemann. The next airport is already being planned. According to the latest information, Dresden Airport will also be monitored from Leipzig at the end of 2023.

Ten air traffic controllers currently work at the RTC Centre in Leipzig, having moved there from Saarbrücken in 2018. They are joined by all eleven colleagues who worked in the tower at Erfurt Weimar Airport.

DFS developed its remote tower system together with the Austrian high-tech company Frequentis, while the video and infrared sensors come from the German group Rheinmetall Defence Electronics. A joint venture was set up between the DFS subsidiary DFS Aviation Services and Frequentis for the national and international marketing of the DFS remote tower system. The joint venture is called Frequentis DFS Aerosense.

Initial research and development of the remote tower centre was carried out within the context of the SESAR research and innovation programme. The project is co-funded by the European Union.

DFS Deutsche Flugsicherung GmbH, the German air navigation service provider, is a State-owned company under private law with 5,600 employees as at 31 December 2021. DFS ensures the safe and punctual flow of air traffic over Germany. Around 2,200 air traffic controllers guide more than three million flights through German airspace in peak years, up to 10,000 every day. The company operates control centres in Bremen, Karlsruhe, Langen and Munich as well as control towers at the 15 designated international airports in Germany. The subsidiary DFS Aviation Services GmbH markets and sells products and services related to air navigation services, and provides air traffic control at nine regional airports in Germany and at London Gatwick Airport and Edinburgh Airport in the UK. DFS is working on the integration of drones into air traffic and has set up a joint venture, Droniq GmbH, with Deutsche Telekom. Other subsidiaries include R. Eisenschmidt GmbH, which markets publications and products for general aviation, and Kaufbeuren ATM Training GmbH (KAT), which provides training for military air traffic services personnel. The joint venture FCS Flight Calibration Services GmbH offers flight inspection services.